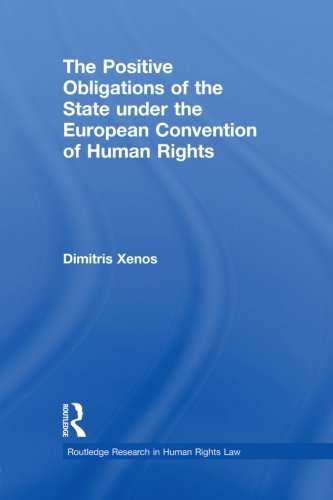 Críticas 'Dr Xenos’s study makes a major contribution, not only to the debate about positive obligations, but also to our understanding of the relationship between civil and political rights, on the one hand, and social and economic rights on the other, and to how the European Convention on Human Rights can and ought to be interpreted.'  Steven Greer, Professor of Human Rights, University of Bristol 'The book provides an interesting, well-substantiated and welcome contribution to the scientific debate about the role and the law of the ECHR' Janneke Gerards, Professor of Fundamental Rights Law, Radboud Universiteit Nijmegen, published in Tijdschrift voor Constitutioneel Recht (Jan 2012) Reseña del editor The system of the European Convention of Human Rights imposes positive obligations on the state to guarantee human rights in circumstances where state agents dot not directly interfere. In addition to the traditional/liberal negative obligation of non-interference, the state must actively protect the human rights of individuals residing within its jurisdiction. The liability of the state in terms of positive obligations induces a freestanding imperative of human rights that changes fundamentally the perception of the role of the state and the participatory ability of the individual, who can now assert their human rights in all circumstances in which they are relevant. In that regard, positive obligations herald the most advanced review of the state’s business ever attempted in international law. The book undertakes a comprehensive study of positive obligations: from establishing the legitimacy of positive obligations within the system of the Convention to their practical implementation at the national level. Analysing in depth legal principles that pervade the whole system of the Convention, a coherent methodological framework of critical stages and parameters is provided to determine the content of positive obligations in a consistent, predictable and realistic manner. This study of the Convention explains and critically analyses the state’s positive obligations, as imposed by the European Court of Human Rights, and sets out original proposals for their future development. The book will be of interest to those who study, research or practice public law, civil rights and liberties or international/European human rights law. Ver Descripción del producto