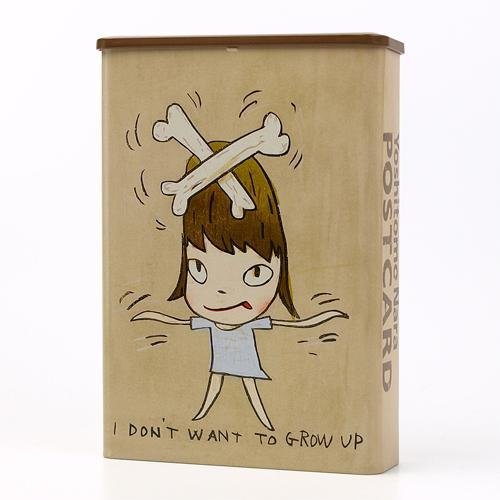 Yoshitomo Nara woodblock print works in 2011 became a box set of postcards and a sticker which is in a cute can.
Careds are MY Little Treasure/I Don't Want to Grow Up/Poindexter/Don't Wanna Cry/S.O.S./Hateful Christmas/1-2-3-4 Pissed Off！/Gypsy Song/Life is Only One/Walk On

Yoshitomo Nara:
Yoshitomo Nara (born 5 December 1959 in Hirosaki, Japan) is a Japanese artist. He lives and works in Tokyo, though his artwork has been exhibited worldwide.
The manga and anime of his 1960s childhood are both clear influences on Nara's stylized, large-eyed figures. Nara subverts these typically cute images, however, by infusing his works with horror-like imagery. This juxtaposition of human evil with the innocent child may be a reaction to Japan's rigid social conventions.

But perhaps most significantly, Nara's upbringing in post-World War II Japan profoundly affected his mindset and, subsequently, his artwork as well. He grew up in a time when Japan was experiencing an inundation of Western pop culture; comic books, Walt Disney animation, and Western rock music are just a few examples. Additionally, Nara was raised in the isolated countryside as a latchkey child of working-class parents, so he was often left alone with little to do but explore his young imagination. The fiercely independent subjects that populate so much of his artwork may be a reaction to Nara's own largely independent childhood.