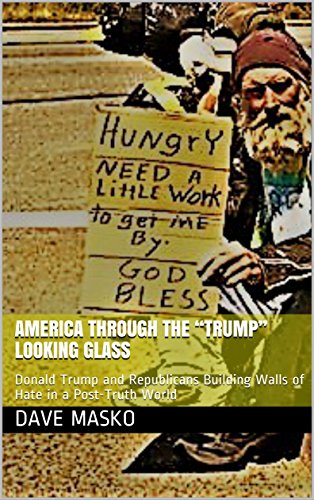 America Through the “Trump” Looking Glass, by Dave Masko. Donald Trump is obsessed with himself; while making the country sick at heart in the process. One recent afternoon, this writer interviewed a Trump supporter in Eugene, Oregon, who is 75, has a square jaw that just from an equally square head, and talks about Trump’s first 100 days as president as if he was describing the infamous Civil War “Battle of Antietam” that is considered to be the bloodiest single-day battle in American history. This collection of “new journalism” reports and essays reminds Americans they are living in a post-truth world designed by odious Trump and his Republican henchmen. This reporting also recounts the freedom loving American nemesis, Donald Trump, who many view as a kin to the leader of an evil biker gang hell-bent on creating daily chaos. This collection of new journalism essays features a meditation on Trump-caused violence and division in 2017 America. Trump’s ego also creates this hyper masculinity of hate, say those protesting “Evil Trump” during recent Women’s March on Washington and Peoples Climate March protests. Overall, the Trump administration’s “alternative facts” continue to damage the reputation of America as the beacon for human rights and true democracy in the world. Instead they carry out aggression against all who oppose this Trump styled American dictatorship where this bully billionaire is never called out by G.O.P. bosses because they are in agreement with this madman barking at the moon via insane tweets that achieve nothing but public discord. For instance, Trump was publically mocked by American historians on May 1, 2017 after Trump crediting the nation’s seventh president, Andrew Jackson being able to stop the Civil War; while go figure when Jackson died in 1845 and the Civil War began in 1861. In turn, Rep. Barbara Lee (D-Calif.) tweeted: “President Trump doesn’t understand why there was a Civil War… it’s because my ancestors and millions of others were enslaved.” Thus, the thesis or argument for this collection of new journalism essays is Trump and the Republicans have made our world an even more dangerous place via echoes of dystopian methods to cut off, and then control citizenry freedoms. The collected essays features people from all walks of live interviewed *for the sake of “real news”) discussing Trump administration fears and angst in face-to-face human conversations because anything online doesn’t count. In fact, the real deal regarding Trump’s first 100 days in office is described by concerned citizens as a “greedy Republican administration dismantling and destroying the good image of the United States of America just because they can!” Meanwhile, the view is “Trump has turned America’s friends into enemies; while Trump continues to alienate all who believe in democratic principles. American Through the “Trump” Looking Glass thus becomes another brick in the wall of pain caused by this bully billionaire and evil minded Republicans who “normalize” Trump’s gross behavior as president.