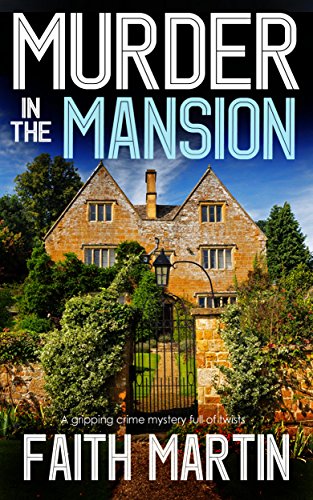 Looking for a brilliant best-selling murder mystery with a feisty female detective?

Meet DI HILLARY GREENE, a policewoman struggling to save her career and catch criminals.

Mattie Jones is found brutally stabbed to death in her palatial home. Hillary Greene is called in to investigate the murder of this wealthy woman. Who wanted her dead and why?

Hillary discovers that Mattie’s snobby attitude had made her many enemies. Mattie was also going through a messy divorce and had a secret lover.

Meanwhile, in a terrifying turn of events, police officers are being gunned down outside their stations. A sniper is on the loose. Who will come under attack next?

Can Hillary cope with the enemies within, a complex case, and the whole force under attack?

This is a crime mystery full of well-observed characters, which will have you gripped from start to the absolutely stunning finish.

MURDER IN THE MANSION is the eighth in a series of page-turning crime thrillers set in Oxfordshire.

What readers are saying about MURDER IN THE MANSION
“Leads you down a number of different paths with potential suspects – lots of twists and turns. This rates up there with some of the best British village mysteries.” Angela Jett

“What an ending.” Viv

“This book was full of tension and danger and kept me on the edge of my seat wondering what was coming next.” Dawn Jones

“I truly enjoyed it.” Joyce Fox

“The storyline is superb, the finish is both unforeseen and shocking.” Ron

“The more I read, the more I love this series.” Carole

THE LOCATION
Many villages on the borders of the Cotswolds have more than their fair share of large, impressive, Cotswold stone ‘mansions’ – homes in times past to the professional classes and farmers. Large, mostly Georgian, with traditional kitchen gardens, orchards, and ornamental plantings, they are quintessentially English.

DI Hillary Greene
An attractive woman in her forties, Hillary Greene is a police officer of many years’ experience, and came up through the ranks. Consequently, she knows how the system works, and is fiercely loyal to the force without being blinkered to its faults. She is a long-standing friend of her immediate superior officer, 'Mellow' Mallow and enjoys a rather enigmatic relationship with the steely Superintendent Marcus Donleavy. Popular with the rank and file for her no-nonsense attitude and competence.

DCI Philip 'Mellow' Mallow
Mel appreciates Hillary's first-rate ability to solve her cases, and isn't happy about her harassment by the officers from York. Known for his sartorial elegance and laid-back manners, he has a sharp mind, and an eye for the ladies. A good friend and ally for Hillary in her recent tribulations, he's determined to keep his best investigator focused on the problems at hand.

PLEASE NOTE THIS IS A REVISED EDITION OF A BOOK FIRST PUBLISHED AS “DOWN A NARROW PATH.”

Books 10-17 coming soon!
Join the Joffe Books mailing list to be the first to hear about new releases.